Rather than celebrating, many Liberians seem to be in mourning this Christmas – thanks to the fact that the financial crisis in this former colony of freed slaves has been worsening since former international football star George Weah was elected president two years ago.

“Honestly, in my entire life this is the first time that I am not able to give my children anything [at Christmas],” a mother-of-five who works in the office of a lawmaker told the BBC.

“I am so ashamed of myself. I am not able to even buy one pair of slippers for one of them,” she said.

This is because Liberia’s cash crisis is beginning to look like Zimbabwe’s, with tens of thousands of people on the government payroll – including lawmakers, teachers and doctors – not receiving their salaries for months on end.

And when they get paid there is no guarantee that they will actually see the money because commercial banks across the country have also run out of cash – or are withholding it.

In the capital Monrovia, long queues outside banks are a common sight, as people try to withdraw money.

Sometimes, they get a little, at other times they leave empty-handed, returning the next day to queue again.

“To access your own account is difficult; these are some of the impediments we face. It makes it difficult in running my activities at home,” social analyst Wrobeh Bleedee told the BBC, as he headed home after failing to make a withdrawal.

The situation is no different at mobile money centres, which give money to depositors on behalf of banks.

Speaking on condition of anonymity for fear of losing her job, the mother-of-five said that after not being paid since October, she received an alert from her bank earlier this month informing her that some of her salary had been deposited into her account.

When she went to do an over-the-counter withdrawal at her bank, she was told she had to go to a mobile money centre which, in turn, pleaded poverty.

“Can you imagine, you go to the mobile money centres and there is no cash to give out,” she lamented.

With the situation so gloomy, it is not surprising that shops, rather than cashing in on Christmas sales, are shutting down.

Some shop-owners have tried to keep up the facade that they are still in business by putting up notices that they are closed for “stock-taking”, even though their shelves are empty and their doors are unlikely to ever re-open. 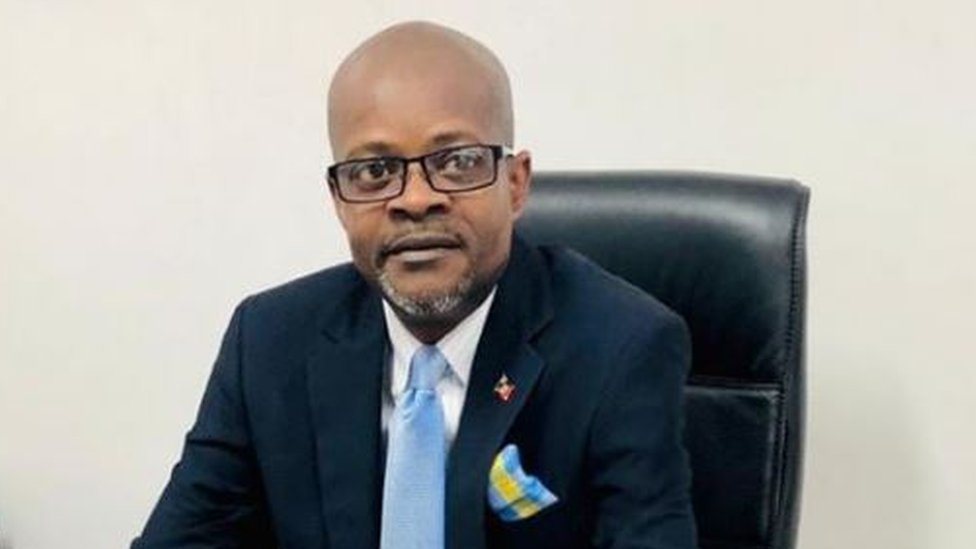 Foreign diplomatic missions have not been spared the crisis either – the US embassy announced on 9 December that it had been forced to suspend the work of its Peace Corps volunteers in 12 of Liberia’s 15 counties because of difficulties in “reliably obtaining needed funds from banks up-country and in Monrovia”.

In May, Mr Weah’s government found itself in a spat with nine ambassadors – including those of the US, UK, France, Norway and the European Union – after it withdrew money from donor accounts at the central bank without their approval.

After the diplomats complained, Finance Minister Samuel Tweah described it as a “borrowing initiative” to ease the government’s financial crisis.

In a BBC interview, Mr Tweah blamed the crisis on the previous government of Ellen Johnson Sirleaf.

“It’s a difficult time. We inherited a collapsed economy. Imagine since 2016, growth has been in the negative. Now we are recovering from that negative growth,” he said.

“The impact of Ebola is lingering. So it is going to take some time for the economy to readjust,” Mr Tweah added.

“George Weah has failed. The economy under Weah has moved from the toilet into the septic tank,” he said.

Critics blame the crisis on the government’s failure to attract any significant foreign investment, and say that to fulfil Mr Weah’s electoral promise to tackle unemployment, it created jobs in the civil service, increasing pressure on government finances.

There has also been a long-running controversy over what happened to about $100m (£78m) worth of newly minted Liberian dollars that had been ordered from abroad during Ms Sirleaf’s rule, which mostly arrived after Mr Weah’s government took office.

An investigation commissioned by the US embassy found that the central bank had failed to properly track what was done with all the money.

Hours after the findings of the investigation were released in February, Charles Sirleaf – the former central bank deputy governor and a son of Ms Sirleaf – was arrested on charges of money laundering and “economic sabotage”. He pleaded not guilty during a court appearance in August.

Supporters of the former ruling party accuse the current administration of having a hand in the poor handling of the bank notes for their personal gain, an allegation they have denied.

To ease the crisis ahead of Christmas, Mr Weah succeeded in getting parliament on Wednesday to approve the printing of 4bn Liberian dollars ($25m; $20m) for infusion into the economy.

He was quoted by the privately owned FrontPage Africa newspaper as saying the decision had been taken “in the interest of national security and to enable our people to celebrate the season in a joyous way”.

His announcement was greeted with some relief, but there is still little sign of jubilation or a last-minute rush to buy Christmas trees or gifts.

Whatever money people have, or get before Christmas, they are spending on food – and cheap Chinese alcohol because that’s all most people can afford.

We hate SPAM and promise to keep your email address safe

Brad Pitt’s ‘Titanic’ reference, the joke too much for Ricky Gervais and more Golden Globes moments you missed

Puppy sleepovers, paisley-patterned botanic garden: News from around our 50 states